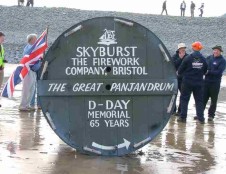 On 5th June 2009, Skyburst recreate their version of the ‘Great Panjandrum’. Unfortunately it never made the D-Day landings, but did make a roll on part featured in Dads Army!

These great photos and videos reveal how the Great Panjandrum, one of the most bizarre British creations, was wheeled out on this day to celebrate the 65th Anniversary of the Normandy Landings.

The original device was packed with over 400lbs of high explosives,  reached a great height of 10ft and would be propelled to over 60mph, hoping to blast a hole in the Nazi’s Atlantic Wall Defence.

But, during some of the first tests, it veered out of control nearly wiping out a whole audience of VIP’s! Sadly, further tests proved that the weapon was too unstable and unpredictable, due to miss fires and bumps on the beaches. 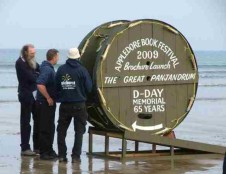 All of the tests took place on Westward Ho! In North Devon, where it was very common to see a group of commanders and soldiers being chases up and down the by this rolling time bomb!

So, the time had come for Skyburst The Firework Co to recreate this uncontrollable rolling disaster, which bought much joy among the team involved. Recreating the device slightly smaller, at 6ft high by 3ft wide, with much appreciated help from archive specialist Tony Koorlander, Skyburst were ready to get explosive!

As the Great Panjandrum rolled into place, a few worried faces asked the question. ‘It isn’t actually packed full ofexplosives is it?’ Skyburst responded, much to their relief and Skyburst’s disappointment, ‘no, we don’t want to kill any dog walkers or onlookers!’

Nerves running high as the replica Panjandrum stood at the ready on a small ramp, everyone was praying that the untested replica was going to work!

Counting down and standing clear, a wave of the Union Flag signalled the ignition of the device as it erupted into a shower of sparks! With all the rockets lit, and blasting away, the Great Panjandrum left the ramp blowing everyone away with its lack of speed. But, it was travelling in a steady straight line, which was a good result!

Although the site was great to look at, there was great disappointment that the replica only travelled a mere 50 out of the proposed 500m.

Mr Pittaway followed on to say ‘It was fantastic! All the fireworks set off, so it was a pretty spectacular way to mark the D-Day commemoration’

‘It did manage to go in a straight line, but only around 50m’ 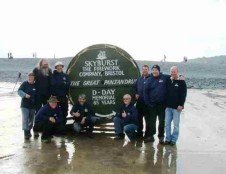 10 workers from Skyburst spent two days attaching dozens of rocketsto the rims of the Drum, which had been commissioned by the organisers of the local Appledoor Book Festival.

The original was designed by Nevil Shute Norway, who predicted it would travel at speeds exceeding 60mph and then to blow a hole in the wall large enough to drive a tank through!

It’s a real shame it tended to attack our men more often than not!

Please see the Videos below, first showing the replica Drum created by Skyburst, and the second with real footage of the original tests.

Interested in recreating something similar yourself? Skyburst love a challenge! Check out some of their otherSpecial Projects and get in touch